(EDITOR’S NOTE: This is Wargo’s first travel story written in 2011 and, until now, never published anywhere save for his personal blog. As you will see, his style of nonfiction writing was still in it’s infancy. Nevertheless, he weaves a bold, honest story about sex and drugs on the open road that is sure to delight our deviant-minded readers.)

This is a true story.

I was awakened by a Gallup, New Mexico police officer lightly kicking the outside of my bivy sack while stating aloud who he was. Unzipping the one-man tent revealed two cop cruisers and a fire engine parked by the side of the highway where I had been sleeping.

“We received a report from a hotel manager about a possible dead body. You weren’t responding to him when he called out to you.”

I apologized to the officer and told him I was a traveler headed to Los Angeles, was dropped there while hitchhiking the night before and bedded down in that particular stretch of grass because it appeared to be public property. The other police officer, white latex gloves on his hands, immediately ran over to the fireman and stopped him from unloading first aid equipment off the truck meant to revive me.

The first officer asked me for some identification. I handed him my passport. After checking out with no record or warrants, he asked me if I knew where I was.

“West of Gallup, I believe.”

The officer handed me back the passport. “Okay. Good.”

…There is nothing inherently dangerous or criminal about the way I travel. People everywhere allow fictional movies, personal fear/paranoia, and a small number of bad thumbs out there to dictate what they believe a “Hitchhiker” to be.

A hitchhiker is not any one thing, we are many things.

This can include the possibility of muggers, rapists and serial killers, yes, but the likelihood of you picking up a violent criminal on the highways is no greater than it turning out your next door neighbor is one such person.

Would you pull over for your neighbor if you saw them by the roadside and gesturing for a lift?

As a hitchhiker, my intention is to get from point A to point B, and sometimes just point Anywhere But Here. When I solicit a ride, I’m not asking for money, food, or cigarettes, nor for showers or a bed to sleep in. It is for the ride alone that I hold my thumb out as you drive by. That isn’t to say, however, a traveler would outright refuse something offered. Though never expected on the road, most anything helps and is always appreciated…

I probably could have gone back to sleep after the emergency vehicles departed, but I thought it best to start my day. I wanted to get over to Interstate 40’s westbound entrance before the majority of motorists began checking out of their hotels and motels. This usually occurs between the nine and eleven AM hours, so I’d have to be quick about it.

I packed up my gear and walked the half-mile to the truckstop located just north of the freeway, right across the street from my onramp. I entered the store/restaurant section of the stop and shot straight over to the restrooms. Stepped inside a toilet stall and I proceeded to remove clothing. Beanie, bandanna, gloves, sleep mask as makeshift mouth/nose cover, second pair of socks over my first and last were the thermal pants worn under my regular pants. I heard the temperature had dropped below 30 degrees Fahrenheit overnight. It sure felt like it.

The air outside had not yet warmed so I left the hoodie on. Cheap, navy blue threads held together with shoddy stitching, a horrendous “NEW MEXICO” graphic across the chest done up in pastels and hot air balloons. When choosing gear to hitchhike with, it is best to bring along items that if lost or damaged will not be missed.

After a brief restroom sink shower, I moved quickly through the store and located breakfast in the form of two ready-to-go, hard-boiled eggs. That left me with fourteen dollars and a few coins to get me by until I arrived in L.A.

“Eat within your means,” I tell myself, “Even when it means eating nothing at all.”

I wolfed down both eggs in the store and proceeded to the onramp.

…It is true that less than stellar hitchhikers are out there. They’re not as bad as the Ted Bundie stereotype many people believe us to be, but they aren’t exactly a joy to ride with either.

These types make it hard for the rest of us to gain many a driver’s trust. They are the ones who never shower and stink up your car, or ask for more money right after you just gave them some. They might be carrying weapons or hard drugs that could get you in trouble with the law. Some may even swipe small objects from your car when you’re not looking.

Travelers like this are NOT the majority. Still, these people have forced me to take steps to separate myself from them. It forces me to act unnaturally. It becomes psychology. Eventually it becomes routine…

I situated myself several yards down the ramp on the road’s shoulder, my medium-sized army pack in front of me advertising myself as a traveler with little baggage.

Cars turned onto the ramp and I took up my usual position. I made sure my entire face was visible to drivers by lowering the hood of my sweatshirt. I stuck out my thumb and smiled big.

Appearance is the most important part of getting a ride. Smiling is necessary because nobody wants to pick up a sad or angry hitchhiker. Something as simple as combing your hair will increase your chances of hitching a ride. Many drivers have told me they picked me up based specifically upon my appearance (i.e. I looked “nice”, or “clean”).

Within fifteen minutes I had a ride. A Native couple and their child in a small truck offering a ride to a truckstop near the border of New Mexico and Arizona. There wasn’t enough room in the cab for me so I rode in back. A camper shell encased a fully loaded bed and I had to sit on a cooler, enduring camper shell ceiling bangs against my head at every bump and dip in the road.

They dropped me in the desert at a strip of Navajo shops along the base of a giant red rock mountain. Natives selling their culture as a means to survive. Even in the middle of nowhere, business is still business.

I went right to the onramp and waited for my next ride.

When the shortbus pulled over my first reaction was to laugh. Sitting in the driver’s seat was an older man from Kansas, who I will call Tom.

“I don’t normally do this, but you look clean.”

Tom lived in Kansas, inside a four thousand square foot dilapidated school-house from the nineteen forties he bought for twelve grand. Amusingly, he delivered shortbuses to other schools all over the country. This particular bus was going to Corona, California and he offered to take me that far.

As we drove west, we told each other about ourselves. He came from a broken home, and had been on his own since age thirteen. When he turned eighteen, he started working as an exotic dancer, then an escort. With his big, bushy mustache and beer belly, it was hard to imagine he was once a chiseled gigolo.

What came next hardly surprised me. I could tell from the moment we began talking that there was something Tom was hiding. He fidgeted anxiously, spoke quickly and seemed constantly distracted while driving.

We had to stop at a weigh station where he parked and got out of the bus to show the authority his papers. When he returned, he asked me if I was a narc. I denied the allegation, telling him I thought cops had better things to do than pose as hitchhikers. He believed me, and then pulled out a bag of amphetamines and a light bulb turned makeshift smoking pipe.

The last (and first) time I did speed was in Duisburg, Germany during the 2010 Loveparade. I had enjoyed the experience, so I joined Tom in the back of the bus and got high.

That straight up, fully focused, spine tightening, coffee hasn’t got shit on this kind of high that reminds you of how often you waste all that energy built up inside of you.

Tom did it to support the long driving hours, I didn’t have any justifications or excuses. Being offered hard drugs on the road isn’t unheard of, but it doesn’t happen too often either. It was happenstance lake that I stripped naked and dove into.

Heavily stimulated, our conversations got more intense. We began to chat about things you’re not supposed to discuss with people. Religion, politics and sex were disseminated at 1000 words per mile. I discovered, despite our age difference, we felt similarly about many things. I became somewhat attracted to Tom at this point, and would have been willing to bet the feeling was mutual.

His plan included a stopover in Kingman, Arizona, leaving him with about five hours of driving the next day. He offered me a place to bed for the night on the floor of the motel room he had reserved in advance. I gladly accepted.

Tom ordered some pizza. We entertained the idea of hitting up a local bar to imbibe a little and see if we could convince one of the female patrons into returning to the motel with us. By the time the pizza arrived, we had dropped the idea in favor of smoking the rest of the amphetamines and watching Forrest Gump on cable television.

After the movie, we channel surfed and talked more. We were sitting on the bed and I could tell Tom was fading fast. I got up and began thinking this whole day I was having might make for a good story. It could be a great way for me to share with others the things I see and deal with on the road.

I sat down at the desk in the room with my computer and began writing. Tom asked me if I needed the light on. I didn’t so I shut it off for him. I was still high and knew I wouldn’t be sleeping any time soon. The drug was gripping my bones and it helped me focus on what I was trying to do. I was so into writing that I almost didn’t hear the sound of Tom stroking his own penis. 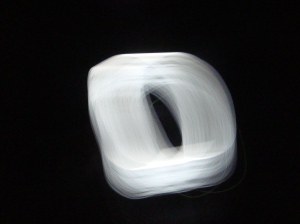 My Computer on Amphetamines

It was quiet at first, but when his whispered, heavy breathing began it gave him away. I smiled to myself, kept writing, and listened to him trying to keep his pumping and eventual climax outside my sphere of awareness.

I became a little aroused by the whole thing. I wrote until six in the morning, getting to the part where the Navajo couple picked me up, and thought it was a good start.

He was awake when I exited the bathroom. I packed up my things and rerolled the sleeping bag I had laid out for sleep I never got.

I think we got a convenience store breakfast and then I passed out on the floor of the bus. It was June 1st and I would be in Los Angeles later that day. My summer awaited me and I was ready for anything.

————-
J.W. Wargo is a Nomadic Bizarro Storyteller originally from Boise, Idaho. His travels have taken him from Budapest to Honolulu and all points in between. He has a Bizarro fiction novella out called Avoiding Mortimer.