The Time I was Punked in Denver with a $500 Check

It’s funny how you can sit down to write about an experience, and you spend the majority of the time lost in thought as you remember it like the story is happening for the first time again.

I seem to always recall the temperature first. It was a cold April morning in Colorado and I was on my way to Europe. To get to Europe I had to catch a flight in New York City and to get there I had to hitchhike across the country.

I had just come from Evanston, Wyoming, where there was still snow on the ground and where they do not like hitchhikers. I received a warning citation from a highway patrolman and he threatened me with jail if I was caught again.

I opted to raise money for a Greyhound rather than risk arrest. I street performed some stories and made a quick twenty dollars, using it to catch the last bus all the way to Denver.

How did I get from Evanston to Denver on twenty bucks? I was a stowaway.

Riding the Greyhound is a pretty common thing in my wandering life. I learned a while ago that if you don’t check any luggage, sit way in the back, and get an inattentive driver, you can pay for the next town over and ride all the way to the end of the line.

The end of this particular line is a shithole in my opinion. I dislike Denver. Something about it rubs me the wrong way. It’s an “east meets west” kind of city, the pinnacle of Urban Cowboy Land. It can’t decide if it enjoys the opera or the rodeo more.

After arriving downtown, I decided to try my luck performing in the only area of town I felt was lucrative enough to bother storytelling in: The 16th Street Mall.

Unlike a traditional mall, it was two kilometers of bus and pedestrian only street with restaurants, shops, a movie theater…etc. lining each side. I found a corner to call my own, set up, and began storytelling. It was morning so the place wasn’t bustling yet. A couple people dropped some bills in my tip jar but no one was stopping to listen.

Behind me and across the street, I was unaware of three young men exiting a cellular phone store and spotting me. They crossed the street and approached me.

Though I could no longer pick him out of a lineup, I remember how the guy felt upon greeting me. He was arrogant. I could pick an arrogant person out of any lineup, all they have to do is remind me of myself.

He wore a slick looking suit, no tie, and designer shades. His hair was typical of a modern trendsetter. The two guys with him wore jeans and were as highly preened as the suit.

I explained to them who I was, what I was doing, and where I was headed.

I decided to try out a set of flash stories I had just recently completed. I called it “103 Friends – 103 Stories – 103 Words or Less” and it was exactly what it sounded like.

He chose a number and I read him the story. He was impressed. He asked me to read him another. His friends chose numbers and I read those. They were getting a kick out it. My faith in humanity was boosted once more. Then things went in a direction I wasn’t expecting.

“This is your lucky day,” he told me. “I like to help out artists when I can. I’m the manager for the band The All-American Rejects.”

He went on to introduce me to one of his two friends. A man from L.A. trying to make it as a model. Apparently, he had run away from his home and was living with the manager. The manager had just bought both his friends brand new cell phones.

“When does your flight leave,” he asked.

“A couple weeks,” I replied.

“I want to make sure you get to Europe,” he said, pulling out his checkbook.

My bewildered eyes stared at the man as he gave me the check. I glanced down at it and read the word “five hundred”. I thanked him profusely. He wished me luck and departed with his friends. It happened so fast I didn’t know what to believe. Had I been so lucky as to run into the manager of a mainstream rock group and impress him enough to hand me my entire trip budget and then some? 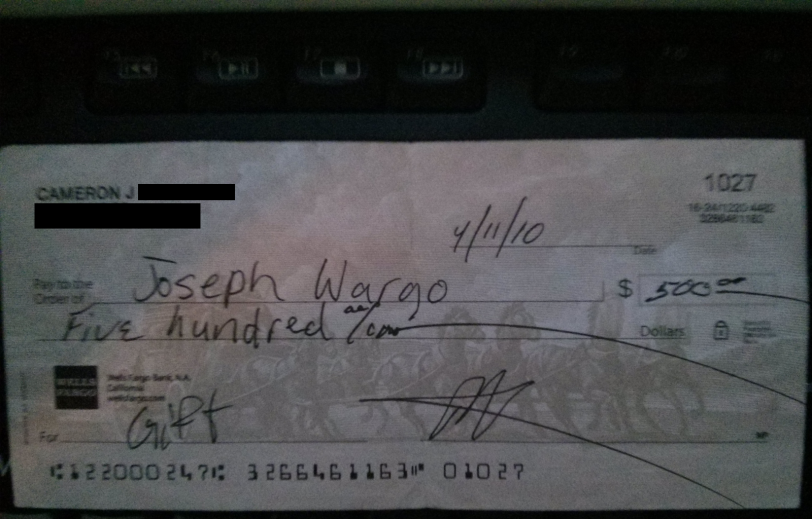 The biggest tip I’ve ever received while street performing.

It was a Sunday and the banks were closed. I needed some sort of confirmation that this was real. I didn’t have a computer with me, but I had a cell phone.

I sent a text to my friend asking him to look up info on the manager of the band. He couldn’t find anything so I asked him to Google the name and address on the check. He found a house in the hills outside Los Angeles. I got excited.

“Maybe this is legit,” I thought.

I took a chance and spent nearly all my cash on another Greyhound ticket for the first stop in Nebraska, hoping I could stowaway overnight to Omaha and cash the check at a bank the next morning. Unfortunately, the driver was on her shit, keeping tabs on everyone’s destinations, and I was dropped in the middle of fuckall in the middle of the night. I found ten dollars on the ground and slept in some bushes outside a hotel.

The next morning I hitchhiked to Omaha and made it to a Wells Fargo bank right before they closed. I had a checking account with them at the time so I tried depositing it.

“I can’t deposit this check,” the teller says.

I nodded and left the bank. Denver pulled a fast one on me, the fucker. That guy, “Mr. Manager”, probably stole the checkbook and wrote a bunch of bad checks before they froze the account.

Still, it wouldn’t put a damper on my journey. I kept moving east, made it to NYC on time, and spent the summer wandering Europe. I kept the check to remind me of two things:

1. Having faith in people is always a risk.

(POSTMORTEM: I did some research and as far as I can tell Pat Magnarella, manager for Green Day, was managing The All-American Rejects in 2010.)

————-
J.W. Wargo is a Nomadic Bizarro Storyteller originally from Boise, Idaho. His travels have taken him from Budapest to Honolulu and all points in between. He has a Bizarro fiction novella out called Avoiding Mortimer.